This year, the Blueberry Council partnered with five trailblazing chefs to take blueberries to the next level. From pasta to dessert, sweet to savory, these chefs captured the versatility of blueberries in all aspects of culinary arts. To get to know these innovators better, read through the questions below capturing the inside scoop on each chef. To get inspired, put on your chef hat and give their unique blueberry creations a try in your own kitchen! 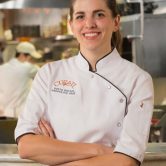 Who has influenced your cooking the most? My mother, she taught me the basis of cooking and how to love good food. 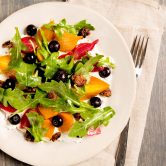 If blueberries were music, what would they sound like? Blueberries would sound like Julie Andrews singing anything from The Sound of Music. Something heartwarming, familiar, and fun that you can sing along to, like Mary Poppins’ “Supercalifragilisticexpialidocious.”

Explain your dish and why you chose those flavors to pair with blueberries: My blueberry recipe is a roasted beet salad with homemade ricotta, pickled blueberries and candied pecans.  The blueberries pickle so nicely because they keep their shape so well and even plump up a little when pickled.  Plus the pickling liquid brings an acidity and spice to the sweetness of the blueberries, a perfect pairing with the earthy flavor of the roasted beets and the creaminess of our homemade ricotta. 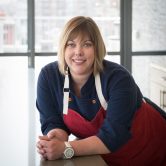 Favorite Cookbook:  “The Geometry of Pasta” by Caz Hildebrand and Jacob Kenedy

What is your favorite food memory involving blueberries? Making blueberry muffins in the 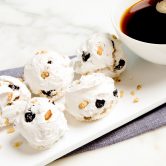 morning with my mom.

Fill in the blank: if I weren’t a chef, I’d be….a marine biologist

Are there any blueberry flavor pairings you find underrated? Blueberries are awesome in Vietnamese food, pairing well with the culture’s flavors and herbs.

Explain your dish and why you chose those flavors to pair with blueberries: My recipe showcases dried blueberries complimented with dark chocolate and orange zest, a pairing I love!  I used dried blueberries as they burst with pure blueberry flavor! These cookies are a recipe my grandmother taught me. They are both gluten- and dairy-free, but delicious and craveable. 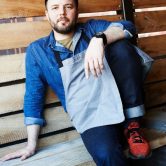 Why did you get started in cooking? For a love of ingredients and stories. 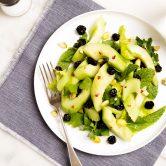 Who has influenced your cooking the most? Andrew Feinberg & Mark Ladner

What’s your favorite dish to prepare with blueberries? I like adding blueberries in a spicy green salsa verde for grilled meats.

Explain your dish: The flavor combination is refreshing, fun, and unexpected – but yet, so obvious. 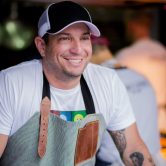 What is your first food memory? My uncle owned an Italian restaurant in Pittsburgh. When I was 14, I started as a dish washer as a way to keep busy after school. I loved watching everyone in the kitchen. Eventually, I started working the line, cooking up some of the 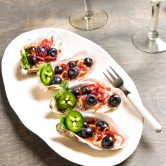 restaurant’s simple dishes. I was working 50 hours a week at just 14 years old and enjoyed every minute of it.

Favorite Kitchen Gadget: Mortar and pestle. I like grinding my own spices – I think it adds a nice textural element to my dishes. Plus, it’s a versatile tool, whether you’re grinding herbs and spices, making pesto, guacamole, rubs, etc.

Where do you see blueberries next? I see them popping up in more savory applications. Obviously, diners are familiar with blueberries in tarts, muffins, pancakes, pies, but the flavors work very well with meats or fish. I’d even pair blueberries in savory BBQ sauces or with cheese!

What’s your last meal on earth, if you had the chance to choose?  Chicken wings and a Negroni.

Explain your dish and why you chose those flavors to pair with blueberries: The sweetness of the blueberries plays nicely with the saltiness factor from the oysters and the prosciutto. 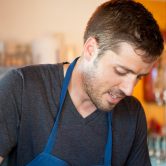 How did you get started in cooking? My brother and I used to host dinners for our friends and charge them money when we were in high school. 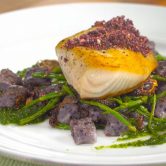 Are there any culinary trends you are crazy about right now? Fermented foods, charcuterie, and eating rotten things.

Explain your dish: Blueberry gnocchi are versatile and can be served with veggies, meat and fish. I chose them because it was a fun dish!